Almamegretta in Naples: concert at the Mostra d'Oltremare

The Almamegretta they will play live at Naples the next 23 June 2013 at the Mostra d'Oltremare of Fuorigrotta, on the sidelines of the 56th edition of the Fair of the House, which will open its doors from Thursday 13.

After having collected some dissent on the occasion of Sanremo 2013, the group returns to be talked about with the publication of the album 'Controra'(published last 28 May), containing 11 tracks delivered in feat. with illustrious collaborations, including Enzo Gragnaniello, James Senese and Gaudi.

The album was anticipated by the pieces presented on the stage of the Ariston, 'Mamma does not know' and 'Onda che vai'. Raiz (vocals), Gennaro T. (drums), Paolo Polcari (keyboards and samplers), Fefo (guitar) and Formix (bass) will be busy touring Italy all summer.

Concert info of Almamegretta in Naples 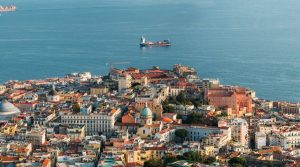 James McCartney, son of Paul, in concert at Caserta in ...

Made in Sud arrives in the early evening with two episodes ...