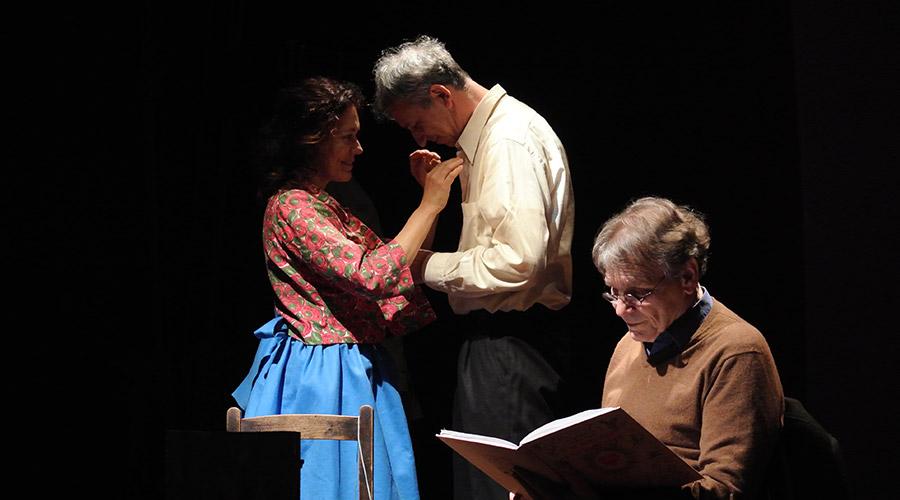 The review of An exemplary love, the show that Daniel Pennac brought to the Teatro Bellini in Naples in first place.

On stage the 29 and 30 April 2017 at the Bellini Theater in Naples, "An exemplary love" by Daniel Pennac he has been represented in our city in absolute premiere bringing to the knowledge of the Italian public a project that in France has been a great success.

The show gives life to a comic book not yet published in Italy, "Un amour exemplaire" in fact, in which the French writer and professor tells one unique and unrepeatable love story which, during the years of his childhood and adolescence, marked him particularly, still inspiring him today .. The original designs are of Florence Cestac which, with its very particular trait, has created the vignettes following the passionate and ironic tale of Pennac. And it is with this dynamic that on the Bellini stage the two artists have transmitted to their audience the events of the two protagonists of the story, directed by Clara Bauer, the music of Alice Pennacchioni and the lights of Ximo Solano.

The show, in fact, was staged in an original way: on the stage the very simple scenography allows the viewer to concentrate on a Daniel Pennac narrator, sitting on a chair next to a trunk of memories, and up Florence Cestac, with shoulders intent on drawing, turning the words of his narrator into vignettes, while a the big screen in the background shows the audience in the hall what is being drawn. With the support of only two actors, Ludovica Tringhi and Massimiliano Barbini, theatrical magic takes shape and presents a wonderful story to those present.

The two protagonists are Jean and Germaine, a couple whose love of poetry, erotic fantasy and sincere and profound feelings has been an example to Pennac for a lifetime. Belonging to different social classes, son of a rich vineyard owner he and poor seamstress her, the two met the little Pennac of 8 years during his holidays in the hinterland of the Côte d'Azur, where the couple lived in a simple house. Jean, repudiated to the family that contrasted his love, never regretted his choice, despite the indignation of the bourgeoisie of the time.
For more than ten years the writer has spent the holidays with them, becoming part of their lives.

The story on the stage takes place in Italian and in French, with Pennac intent on explaining to Ludovica Tringhi, first journalist intent on interviewing him then a real character that according to the need turns into Germaine or her friend Rachel (while Barbini becomes Jean), the purity of this love made of fun, passion for books and mutual reading aloud until the inevitable separation that only death could give. With the typical irony that distinguishes the writer, who tells in French while the actress Tringhi translates simultaneously, the story immerses the viewer in a unique experience.

The experiment, almost a challenge, to bring a comic book to the stage of a theater, is successful both because many cartoons lend themselves perfectly to a theatrical scene, and because the 60 minutes of the show take place sliding and engaging, it is never annoying the double language. Indeed, traveling on the sinuous wave of the French, we feel even more involved in the situations of Jean and Germaine, being able to understand why the two have never wanted children or work to avoid the risk of placing intermediaries in their relationship.

The two are still today for Pennac what a love should be, strong and simple. And the theatrical magic of the show masterfully manages to convey this belief.

Recall that Pennac will also be at Comicon of Naples.

History lessons in Naples: the program of meetings with famous historians