The masterpieces of theater re-enacted in the Contemporary Classic cycle at San Domenico Maggiore in Naples.

Starting from the 9 August 2019 and until September 1st held at the cloister of the Convent of San Domenico Maggiore in Naples Classic Contemporary, review of theatrical performances that aligns a series of great classics reproposed in a current key. The artistic direction of the event is by Gianmarco Cesario and Mirko Di Martino.

At its sixth edition, the exhibition is renewed but remains true to itself. Also this year the great classics of the theater are proposed again, but with a novelty: each show will remain on stage for at least two consecutive dates in order to support the new productions.

The shows will almost all be premiered and staged by young Neapolitan directors invited to try out a group of selected texts.

The program brings together both the ancient theater (Sofocle and Plautus) that the modern comedy (Shakespeare and Goldoni) and the greats of the twentieth century provocateur (Savage, Genet e Viviani), as well as the masterpieces of Neapolitan music or those of song writing. There is also a look at the commedia dell'arte, precisely in the year in which Naples is the international capital of the theatrical genre that represents Italy the most in the world.

Yearnings for vacation
by Carlo Goldoni
***

The Menecms
by Tito Maccio Plauto directed by Antonio Gargiulo
***

only Viviani!
MUSIC AND VERSE OF RAFFAELE VIVIANI - directed by Salvatore Sannino
***

Where: at the cloister of San Domenico in Naples

In Naples Festival of philosophy in magna Grecia 2019 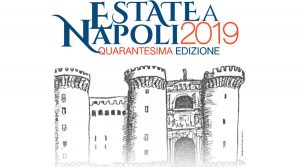 Summer in Naples 2019 with many events, concerts, theater, exhibitions and cinemas in the city

Wellness Day at Monte Nuovo in Pozzuoli with games, ...

Napulitanata at the Principe di Napoli Gallery: dance with ...