Kayak in Naples, the most beautiful excursions along the coast 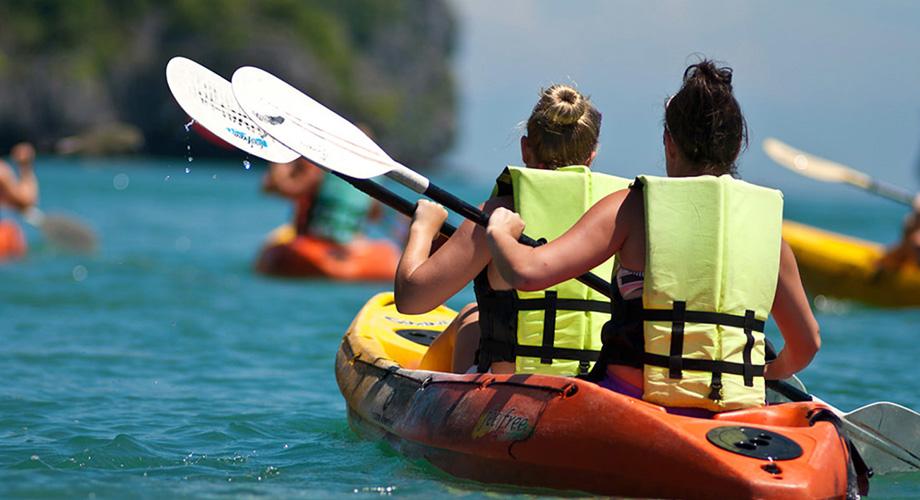 Naples and the islands seen from the sea thanks to the wonderful kayak excursions, tours available all year round!

For summer The best kayak sports associations in Naples have made a rich program of sea ​​excursions that will allow us to know a different aspect of our territory.

Group excursions, of the minimum duration of 90 minutes, will allow you to admire nearby caves, coves, beaches, remains of ancient buildings that otherwise can not be visited and spend hours in the company of friends or relatives.

Below you will find all the information.

For almost sixty years the main activity of Marechiaroinbarca it is the transport of swimmers and tourists along the coasts of Marechiaro and Posillipo with traditional wooden boats. In recent years, to keep pace with the times, has expanded its program using kayaks.

Path for the "Vento in poppa" kayak excursion

The tour lasts for 3 hours provides for the kayak departure from Marechiaro to the Submerged Park of gaiola. During the journey at sea you will be able to admire the remains of a Roman building called the "Palace of the Spirits"which some scholars also call the" Villa of Virgil ". Continuing west, it is possible to see the remains of the" School of Virgil "where it was believed that the poet practiced magical arts.

Immediately after you will appreciate the caves dug into the coast by the force of the waves, including the "Grotta dei Tuoni" and the "Grotta dei Coralli". Continuing we will observe the grandiose natural amphitheater of Trentaremi and returning towards Marechiaro you will admire the famous "Fenestella".

Price: € 30,00 with the possibility of swimming during the excursion

At other kayak excursions the wind names were given in such a way as to distinguish between the included options.

This route includes paddling, guided hike and lunch in a typical restaurant of Marechiaro.

Price: to be defined at the reservation

The tour includes paddling, guided hike and dinner in a restaurant in Marechiaro.

Price: to be defined at the reservation

When: every day, from March to October, weather permitting

Il Canoeing Club Naples è an amateur sports association founded in 1975, engaged in various activities including the competitive one for the practice of Canoeing and tourism to promote the beauties of the territory. But there are also several kayak excursions during which you will appreciate the Costa Flegrea.

Route of the Costa Flegrea excursion by kayak

The excursion, lasting two and a half hours, provides for departure from the Gulf of Bacoli, a stretch of sea between Capo Miseno and Lake Lucrino, overlooked by the homonymous locality. Continue towards the Campi Flegrei marine reserve to admire the colors of the Mediterranean scrub, the caves, the islets and the many beaches including the island of Pennata, the Poggio beach and the Castello di Baia. During the navigation will be made stops to visit the beaches and caves. To accompanying travelers there will be a federal Fick technician. The price of the excursion also includes the paddle, the life jacket and an energy drink. To participate is reservation required.

When: all year round

Timetable: to be requested upon booking

Prices: 25 euro per person with guide | 10 euro half a day without a guide

Booking: it is necessary to book through the Canoa Club website.

The ASD Kayak Procida is an amateur sports association, based in Procida, affiliated with FICK (Italian Canoe and Kayak Federation), which organizes kayak excursions to spread the use of this eco-compatible vehicle and to enhance the island of Procida from an environmental, historical and naturalistic point of view. During the summer it provides several excursions at dawn, in the morning, at sunset and with the full moon. To participate you need to book (see the information mirror below).

The excursions will have different levels of difficulty and durations and different paths, let's see them in detail.

The excursion provides a crossing (where the stretch is shorter) from Procida to Ischia, lasting 3,5 hours. Proceeding towards the Aragonese Castle you will reach the locality "Ischia Ponte" and, after passing under the arch of the bridge that leads to the ancient village, you will proceed to the beach of Cartaromana, where you will make a stop. Here it will be possible have lunch in a seaside restaurant by reservation at the time of joining. After the stop you return to Procida following the same route.

This excursion of the duration of 4 hours it is ideal for getting to know the secrets of Procida. We will start from Borgo della Chiaiolella and you can admire several places including Corricella (an ancient village of fishermen), the Grotta del Bue Marino, the rock of Sant'Anna, the Marina Grande and the Pozzo Vecchio beach. The excursion will end on the Chiaiolella beach where, who will have previously booked, can have lunch at a restaurant by the sea.

The excursion, lasting for 10 hours, is ideal for spending a whole day at the beach. We will depart at 8:30 from Procida on a sailing boat to Capri, from here we will proceed by kayak along the west / south / east coast of Capri. They can be admired wonderful caves and inlets and after the kayak ride you can enjoy the breakfast on board the sailboat. The return is scheduled for the 18: 30.

The excursion, lasting 90 minutes, is ideal for those who want to try their hand at a new adventure. The participants will skirt the Chiaiolella and Ciraccio beaches, enter the Pozzo Vecchio bay and arrive on the beach called "del Postino" where Massimo Troisi shot some scenes of the film "Il Postino". At the end you will follow the same route for the return.

On the trail of the Postman

The excursion has a duration of 4 hours and will allow you to visit the village of Corricella and the beach of Pozzo Vecchio, places that have formed the natural scenery of the most exciting scenes of Massimo Troisi's latest cinematic masterpiece: "The postman".

The excursion, lasting for 3 hours, will start from the Chiaiolella beach, will continue towards the tips of Solchiaro and Pizzaco and will land on the port of Corricella, an ancient fishermen's village where you can taste the sandwich from his friend "Felice" or for those who had agreed before you can have lunch in one of the local restaurants or have a quick packed breakfast. At the end you will follow the same route for the return.

Information on Procida in Kayak

When: from July to September

Price: € 10,00 for registration + € 20,00 average contribution to participate in social activities

Reservations: it is necessary to book through the relative web page or by writing to [email protected]

Kayak Napoli is a cultural-recreational association whose goal is to enhance the use of kayaks as an eco-friendly vehicle to make excursions to those places that can not be reached in other ways. The excursions they last about three hours and are aimed at groups from a minimum of 3 to a maximum of 15 people. The membership price includes equipment, guide and canoe rental. Let's see in detail what are the planned tours:

The Wild Posillipo Tour leaves from the little beach of Via Ferdinando Russo and proceeds towards Villa Rosebery, an ancient palace built in the early nineteenth century and summer residence of the President of the Republic. Following the coast you will reach the Borgo di Marechiaro, an area famous for its Roman ruins. The excursion will continue towardsprotected marine area of ​​the gaiola where you will stop to visit the Interdisciplinary Studies Center and take a bath in the beautiful waters of the place. To conclude the path we will proceed to the Bay of Trentaremi, known for the caves dug into the yellow tuff and for the remains of the Roman villa of the emperor Augustus.

Naples and its villas

It starts as usual from the beach of Via Ferdinando Russo and proceeds towards Villa Volpicelli, an ancient building built in 1626. Continue to the Baia del Cenito until you reach the port of Villa Lauro known for its mineral water source. The navigation will continue along some of the most beautiful neoclassical villas of the city until you reach one of the hidden beaches where a stop will be made. The excursion will end in Palace Donn'Anna, a seventeenth century palace considered the most famous of Naples.

The Full Moon Kayak has the same itinerary as the "Naples and its villas" tour, plus it has a stop at the beach of Villa Lauro and provides a surprise every evening. The departure is scheduled for the last hours of the day, when the sea lights up with the colors of the sunset. After going all the way, accompanied by the light of the full moon you will come back admiring the Vesuvius that dominates the Gulf of Naples in the background. For those interested in this stage provides a dinner reservation on board a fishing boat or on a hidden beach. The event will take place only on full moon days, so the dates are not fixed.

When: every day of the year (except Full Moon Kayak), weather permitting

Where: departure from the Lido Rocce Verdi, via Posillipo n. 68 (Na)