It was held yesterday in the splendid setting of Palamaggiò di Caserta, the live concert of the Fashion, for a return to beautiful style in the Campania region. It is always a nice emotion for Kekko Silvestre, frontman of the Milanese band, treading these lands, also by virtue of his footballing faith, which links him viscerally to football Naples.

For those who do not know, the singer feeds this passion since a very tender age, and would be willing to do anything to see their favorite team win the tricolor, and triumph, once and for all, on the two Milanese (and not only). It will certainly have been a great joy for him to see Napoli dominate the Milan, and center the qualification of the next Champions League from the main door (the rossoneri, instead, will have to go through foreplay).

Yesterday evening, Kekko will have spoken directly with one of the protagonists of the Italian season, Lorenzo Insigne, present at the concert with his wife, and two other teammates. Are you curious to know who we are referring to? Gianluca records and Emanuele Calaiò, both accompanied by their respective spouses.

Kekko, sighted the magnificent, has not lost an opportunity, asking to immediately make one photo with him. Once in love with the pocho Lavezzi, will the Modà leader adopt Insigne as his football idol? Who knows. 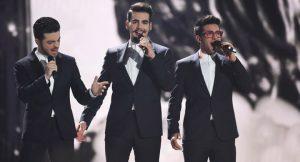 The Rocky Horror Show on stage at the Bolivar Theater

Osteria al Rifugio in Via San Gennaro in Antignano | ...