HomechronicleNaples, Pope Francis is already on the crib of San Gregorio Armeno
chronicle

Naples, Pope Francis is already on the crib of San Gregorio Armeno

In San Gregorio Armeno this important opportunity could not be missed. The "crib" Genny Di Virgilio, master craftsman for generations, specialized in the creation of splendid shepherds in terracotta, he wanted to pay homage to the new Papa Francesco, the Argentine cardinal Jose Mario Bergoglio, elected by the conclave last night towards the 19, as only he and his art can do.

And so, from this morning, Pope Francis already has a pastor dedicated to him on the most famous nativity scene in the world, made by the oldest and most famous workshop of San Gregorio Armeno. The figurine is thirty centimeters high, has its exact appearance, and as Di Virgilio himself admitted:

I made it during the night, it wears the same clothes as yesterday, it's a unique piece painted in oil. As I did with Pope Ratzinger in 2006 on the occasion of his visit here in Naples, when I had the opportunity to deliver the statue after the celebration of mass in the Cathedral, I hope to give it to Pope Francis as well as soon as he comes to visit the city.

The original figurine has already attracted the attention of many tourists and passers-by, and there were also the first purchase requests from some customers that arrived mainly on the e-mail address of the most famous shop in San Gregorio Armeno, active since 1830.

The masters Di Virgilio had previously also realized the pastor of Pope Ratzinger complete with a sign that says "I resign", which appears behind the new (and already beloved) Pope. 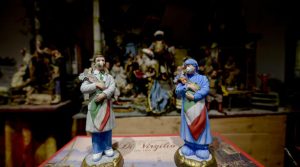 Coronavirus Naples: here is the Nativity scene with doctors and nurses 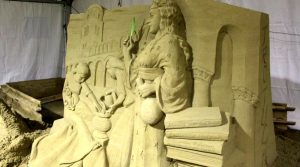 Sand Nativity 2019 in Salerno, the unmissable exhibition for adults and children

Naples: the National TPL Strike for the 22 arrives ...