Program, dates and tickets for the summer festival Pausilypon - Suggestions at the Dusk, which will take place between May and June 2014

The evening concert festival hosted by the Pausilypon Archaeological Park, with its fascinating title "Suggestions at the Dusk ", Is now turning into a fixed appointment for our city.

Every year an autumn edition ed a summer edition they see the alternation of local and international artists on the Pausilypon stage, against the background of the ancient one Villa D'Otium by Publio Vedio Pollione.
The edition of these two months, May and June, will be the sixth and is, as every year, conceived and edited by Gaiola Onlus Interdisciplinary Studies Center, in collaboration with the Archaeological Superintendence of Naples and with the Patronage of the Campania Region and the Councilorship of Culture of the Municipality of Naples.

The concerts start from the 10 May 2014 and the 15 June 2014 will end, always at sunset and always with the intention of approaching cultures, sounds and voices of lands far away from us.
From this year, Suggestioni all'Imbrunire will become "Stable review of the Pausilypon Environmental Archaeological Park" and, from next year, the event will see the collaboration of the PAN of Naples, as announced by the theatrical artistic director Stefano Scognamiglio. 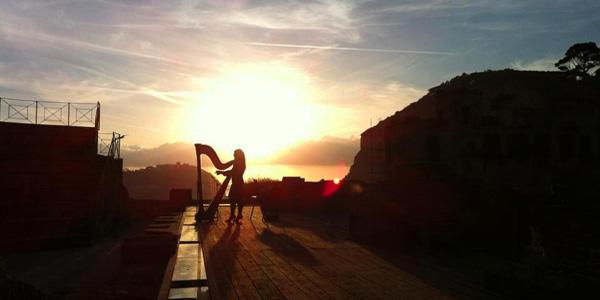 This year the evening appointments will be 12 and, as usual, each concert will be preceded by one guided tour at the Pausilypon Archaeological Park, starting from the Grotta di Seiano.

Below, the program detailed review.

Pianista Ivano Leva will give us an evening of total improvisation, thanks to the notes of his piano, for a journey in which music is seen as territory of continuous jet invention. His sound blends jazz, pop song, a popular melody, but also classical music, rock and avant-garde of the '900.

With the vonce of Rondinella and the accordion of Cincotti we can make a journey between land and sea, through a journey made of images, voices and stories. The two artists are two silent souls and sound, ancient and modern, esoteric and poignant that they breathe errant in honor of the sea.

The acoustic ensemble of La Mescla will take us on a journey through the cultures of the Mediterranean, from the south European ones such as Spain, Greece and the Balkans to those of the North African countries. An evening dedicated to sharing and sharing, with dances, songs and food for thought to better understand these cultures that often learn to coexist, despite the difficulties.

The talented harpist (Gifuni) and flutist (Gioia) give us a nice trip between French impressionism and Italian bel canto. Thus we will relive the atmospheres of the nineteenth and twentieth century Italian and French, through a concept that develops between the melodies of unpublished pieces and already famous pieces, written for harp and flute.

A mix of sounds and influences thanks to the music of Merolla and Veno. In fact, the multi-instrumentalist and saxophonist Veno will propose his acoustic and electronic music Riccardo Veno playing Indian flutes, Irish flutes, ciaramella and marranzano, while the percussionist Ciccio Merolla will evoke Mediterranean, Middle Eastern and Tibetan atmospheres, playing also Moroccan nenies.

A text written by Antonella Cilento, accompanied by percussion by Adriano Poledro, tells the story of Filomena Pennacchio, called to fuchera, a Samnite brigand, among the most famous "rebels" who fought as a result of the Unification of Italy.

Like 2 me - Ilaria Graziano and Francesco Forni (voices and guitars)

"Like 2 me" is the title of the last work of the singer Ilaria Graziano and of the talented guitarist Francesco Forni. Disc that the two artists will propose to the audience in a concert that will talk about the inclusion of the other and introspective research. The title can be read both in Italian and in English.

Alana Sinkëy, voice, and Sergio Salvi, plan to form the CosmoSoul group and present their latest album, Terra. Earth understood as a return to nature and to one's roots, but also as Nature, union, identity, strength, imperfection, love, belonging.

Show taken from "The birds of Aristophanes" and staged by the Compagnia Asylum Anteatro ai Vergini. It is a comedy that tells the improbable deeds of improbable birds and probable scoundrels, through a series of particular sounds and language grommelot.

It is an idea born from the mind of the artist Francesco Capriello and that debuted last year, during the autumn edition of Suggestions all'Imbrunire al Pausilypon. A band consisting of piano, double bass, brass section, percussion with chorus and without any electrical support, composed of 14 elements almost all coming from the Naples Conservatory. They will perform in traditional Santeria songs dedicated to the Orichas, the semi-divinities of the Yoruba people of West Africa. Their sound ranges from Afro-Cuban music to jazz and reggae.

The Melville novel, staged here following the translation by Cesare Pavese and in the adaptation of Sonia Scognamiglio, focuses on the most adventurous aspect of the fight between Captain Ahab and the white whale.

Information on Suggestions at Dusk May - June 2014

When: 10 from May to June 15 2014
Where: Pausilypon Archaeological Park
Price: contribution of 15 €. Concessions are provided for university students and ArteCard holders by purchasing a ticket at the site.
Duration: around 3,5 hours
Schedule:entrance with guided tour from 17.30 to 18.20. From 18.20 to 18.30 admission without a guided tour.
Entrance: Cave of Seiano Downhill Coroglio 36. Participation while seats last
Information:

Shuttle service from the Conventioned Parking of Città della Scienza (Via Coroglio). 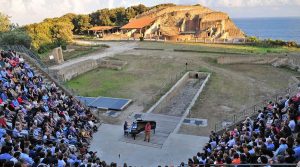 Suggestions at dusk 2019 at the Parco del Pausilypon in Naples: concerts and sunset shows