to Pollena Trocchia for example, it can be taken as one of the cases in which it is possible to redevelop an area reduced to a real illegal landfill. Especially if we are talking about areas where there is a archaeological site of inestimable value.

The work to make that which was a true revelation hidden by heaps of waste they started in the 2008. Let's talk about the area hosting aancient Roman Villa in Pollena Trocchia, precisely in via Vasca Cozzolino. For many decades the site was abandoned and left to the most absolute degradation until it turned into a landfill. People poured there above all old appliances and tires.

Yet, from 5 years to now the place has been constantly reclaimed: it would seem to be a Roman domus of the first century after Christ and at the moment, of the site, only the thermal complex and a water cistern. Very interesting discoveries, however, concern 9 burials, including those of 2 twins inside an amphora.

The work of recovery was possible thanks to the administration of the municipality and to the experts of Apolline Project.
In addition, by April, the site will be open to the public, although it can be visited by schoolchildren for some years.

These important recovery interventions have also earned an award to the mayor of Pollena Francesco Pinto and the archaeologist Girolamo De Simone: theHeritage Prize.
This "discovery" is located a few km away from the Villa in Somma Vesuviana, known as the villa of Ottaviano Augusto, even if in the archaeological world it seems almost certain that it did not belong to him. 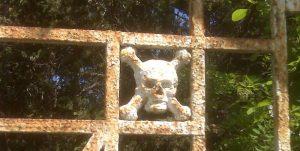 Itinerant exhibition on the state of abandonment of the Colerosi Cemetery

PrimaVeraNapoli: events, music and shopping at the Galleria del Mare