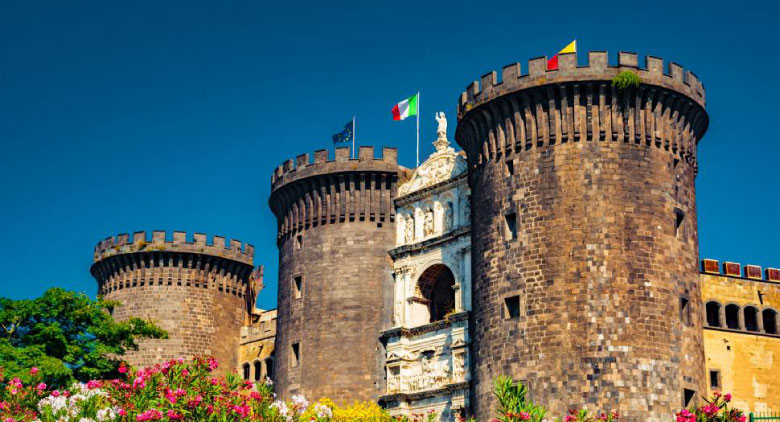 From Castel Nuovo to Maschio Angioino

Castel Nuovo, better known by the name of Maschio Angioino, is a medieval and renaissance castle built on the wishes of Charles I of Anjou in 1266, after defeating the Swabians, having ascended the throne of Sicily and having moved the capital from Palermo to Naples.

From the thirteenth century the imposing Maschio Angioino, with its large five cylindrical towers, represents one of the symbols of the city of Naples, thanks to its strategic position in Piazza Municipio, in the Porto area.

The fortress was built at the behest of King Charles I of Anjou, who moved the capital of the kingdom of Sicily from Palermo to Naples.

The "New" castle was built to make guardian to the city from enemy incursions, in fact the position in which it was built was of strategic importance and went to complete a defensive system that previously had as protagonists the Castel dell'Ovo, too much now old and obsolete for the attack systems of the time, e Castel Capuano, in a little strategic position and far from the sea. And these last two castles have suggested the name of Castel Nuovo, to distinguish it, precisely from the previous two, more ancient ones.

The appearance of the castle that we see today is very different from what the Neapolitans who lived at the time of construction had to see. Today the castle shows how stratification of many ages.

The fortress has in fact remained the protagonist of Naples for many years, was home to rulers and illustrious guests: after the death of Charles I of Anjou, the structure hosted the new king Charles II of Anjou, called the Lame, and the whole his family; the Castle was the scene of the abdication of Pope Celestino V and the consequent election of Bonifacio VIII in 1294.

The original appearance seems to have kept it instead the Palatine Chapel, incorporated in the heart of the castle and built in the 1307.

A first renovation of the castle occurred in the 1308 with Roberto the Wise, who also hosted illustrious figures of the time, such as Francesco Petrarca and Giovanni Boccaccio, and called the best painters, such as Pietro Cavallini and Montano d'Arezzo, to fresco the walls of the castle. In the same period Giotto was also the protagonist of the decoration of the Palatine Chapel, with the cycle of stories from the Old and New Testament, unfortunately eliminated in the fifteenth century.

From the 1343 was Giovanna I of Anjou the hostess of the castle. In the 1347, however, the queen was forced to flee to France to escape the revenge of Louis I of Hungary, who went to Naples to attack the fortress due to a palace conspiracy against his brother Andrea, husband of the same Giovanna. Luigi I suspected that it was the same queen of Naples who organized the plot against Andrea. Left unguarded, Luigi completely plundered the castle, which was restored upon the return of Giovanna I.

Other attacks were carried out against the Castel Nuovo by various political figures.

The fortress changed hands many times, Charles III of Durazzo he took it on the occasion of the Naples outlet, subsequently he left it to his son Ladislao, who lost the castle in favor of Louis II of Anjou, but it was regained not very late, in the 1399. Ladislaus I of Naples lived there until his death, in the 1414.

Alfonso the Magnanimous of Aragon, after having conquered Naples in the 1443, decided to rearrange the structure, equipping it with new defensive walls and a spectacular triumphal arch. The fortress, entrusted to the expert hands of the Majorcan architect Guillerm Segrera, takes on a Gothic style.

The castle came looted again during the expedition of Charles VIII of France to the 1494. But with the fall of Ferdinand II and Frederick I of Aragon, Naples fell to the hands of the crown of Spain, and constituted the Kingdom of Naples as viceroyalty. And it was from that moment that Castel Nuovo it became a simple military garrison, losing the function of royal residence.

From this period onwards the castle suffered many damages, due to the neglect and change of functional destination of the structure. But functionality was not the only reason for the destruction of many artistic ornaments, in fact the new owners they wanted to eliminate the characteristic signs of the Angevin and Aragonese rule.

At the beginning of the 16th century the castle was equipped with new bastions and ditches, signs still evident in the structure. The towers are 5 and draw the corners of the planimetric perimeter of the fortress.

Castel Nuovo was again renovated by Carlo Sebastiano di Borbone, who ascended the throne of Naples in the 1734. With the new rulers the castle definitively lost the role of royal seat. The Bourbons worked on the construction of new royal residences, such as the Reggia di Piazza Plebiscito or the Royal Palace of Caserta, among others.

The last substantial restoration took place in the 1823 with Ferdinand I, while in the '900 only some aesthetic arrangements were made in the area surrounding the castle. The buildings that flanked the castle to make room for a garden are in fact demolished.

Today the castle hosts cultural events and shows and is the permanent home of the Civic Museum, as well as the library of the Neapolitan Society of History.

What to visit in the Castel Nuovo (Maschio Angioino)

The Triumphal Arch, which marks the entrance to the castle, was built between the 1453 and 1468, between the "di Mezzo" and "di Guardia" towers, which defend the entrance to the fortress. The work is inspired by the triumphal arches of the Roman era and houses reliefs of the Triumphs of Alfonso. A lower arch has Corinthian columns, while the second arch is adorned with Ionic columns. On the attic there are the statues of the four virtues, surmounted by a semicircular crowning with the statue of San Michele on top.

The bow marks an important turning point in the history of Italian art, the monument presents the characteristics of a stylistic ferry from the Gothic to the modern.

The Palatine Chapel is located within the perimeter of the fortress, built by the Angevins. Started in 1307, the structure has maintained its original appearance during his 7 centuries of life.

The chapel overlooks the harbor's back wall, while the façade on the courtyard is adorned with a Renaissance portico and a splendid rose window.

The structure was partly restored at the end of the fifteenth century, due to a strong earthquake in the 1456. The internal structure has one Gothic style, with windows that illuminate the rooms and works of art. The visible paintings are attributed to the Florentine artist Maso di Banco. While there are numerous sculptures hosted by the chapel, such as "the Tabernacle with the Madonna and Child”By the student of Donatello and Brunelleschi, Domenico Gagini.

Instead they were destroyed, in the fifteenth century, Giotto's frescoes related to a cycle of the Old and New Testament.

Hall of the Armory

Important room, located to the left of the Palatine Chapel, which it housed the castle's arsenal of war. But the beauty of this room is due to the discovery of important archaeological finds from Roman times, ranging from the 1st century BC to the 5th century AD, today visible thanks to a glass paving.

Hall of the Barons

The Sala dei Baroni is the main hall of the castle. Called Sala Maior, it was born as Hall of the Throne and was commissioned by Roberto d'Angiò, who he even called the artist Giotto to fresco the walls (paintings now lost).

The hall was renovated during the reconstruction of the castle commissioned by Alfonso of Aragon.

An important event gave its name to the hall, in fact some barons, who conspired against King Ferrante I, they were arrested here and put to death after being tricked into the marriage of the king's niece.

The room overlooks the sea and has a beautiful umbrella-shaped vault reinforced with ribs, with pointed arched lunettes.

The room houses the two-faced marble portal by Domenico Gagini, with bas-reliefs depicting Alfonso V of Aragon. Furthermore, until the 2006 the hall hosted the meetings of the Naples City Council.

Chapel of the Souls of Purgatory

The structure is probably to be identified with the fourteenth-century chapel of St. Martin of Tours. The room is the result of changes to the 16th century castle wanted by the Spanish viceroys.

The interior has a Baroque style decoration, with the main altar adorned with a painting of the Madonna del Carmine with San Sebastiano, Pope Gregorio I and the souls in purgatory.

The chapel bears the name of the Calabrian saint precisely because he hosted it during his trip to Paris. It was consecrated in the 1668, after a restoration in baroque style.

The 15th century vault was designed by Guillerm Segreram, but it was destroyed during the Second World War.

Prisons and the legend of the crocodile

In Naples every legend is history, and even Castel Nuovo is hit by a famous legend.

Below the Palatine Chapel there are two rooms used, at the time, a prigione: the prison "of the Mile" is that "of the Barons".

The Mile prison was previously used as a grain store, but when it was used as a prison it was the scene of strange events.

The prisoners disappeared under totally mysterious circumstancesis. But the dilemma was not long in being solved: a large crocodile infiltrated inside the prison and took the unfortunates with them.

Legend has it that subsequently, to remove all traces of the most uncomfortable victims to execute, a pit was dug in the floor, connected directly into the sea, through this pit the large crocodile acted as an "executioner", bringing the unfortunates with them more easily .

The second room, the so-called prison of the Barons, is directly connected to the Palatine Chapel by a spiral staircase, and bears this name precisely because of the conspiracy of the Barons held in the Throne Room.

Probably belonged to those nobles killed the four coffins without inscription present inside the prison, which after that conspiracy remained forever inside this dark and narrow hall.

Beyond the stories and legends, Castel Nuovo is a splendid symbol of Naples.

The events that took place in this noble place made sure that this fortress remained indelibly inscribed in the Neapolitan history. Home of kings and queens, but also of conspirators and executioners crocodiles.

Attention: visits must be booked on the portal inputs.comune.napoli.it

By car
from the highway, ring road, exit Centro - Porto, take Via Marina to Piazza Municipio

By train
from the Piazza Garibaldi railway station take the 1 Line subway from Garibaldi, direction Piscinola, and get off at the Toledo stop. Or from Piazza Garibaldi take R2 bus to Piazza Municipio

In funicular
from Piazza Fuga (Vomero) Central Funicular to the Augusteo stop. Continue on foot to Piazza Municipio (7 minutes)

Phone: 0817957722
Email: [email protected]
The Maschio Angioino on the site of the Municipality of Naples

The Sansevero Chapel in Naples

The Santa Chiara Complex in Naples