Spanish
Art and culture, What to see, Famous places, Monuments

The Veiled Christ in Naples: history, legend, timetables, how to get there and curiosity 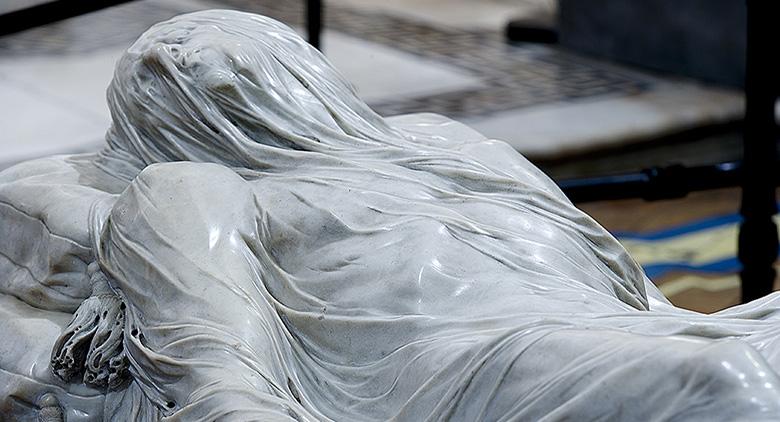 The statue of the Veiled Christ

We have certainly heard about it at least once in a lifetime.

Il Veiled Christ it is a statue in front of which, whatever our beliefs and our religion, we cannot fail to be amazed. A creation that leaves us breathless and speechless.

It seems that the writer Héctor Bianciotti he was even caught by the Stendhal syndrome while he admired this masterpiece.

Tourists from all parts of the world, every day go to the most historic part of Naples, in the Chapel of Sansevero, to contemplate this work of art recognized for its incomparable beauty and by the 2006 declared as the "Monument symbol of the Neapolitan city".

The conductor Riccardo Muti he used his face for the cover of his Mozart Requiem. Director Ferzan Ozpetek in its "Naples Veiled"He gave us some very close camera shots, but if we have never seen him live we can't even imagine his greatness.

The sculptor succeeded, working on a single block of marble, to give life to a statue life size (180x80x50 cm) which represents the lifeless body of Jesus Christ, covered with an extraordinary transparent veil in marble, lying on a bed.

The story of the birth of the Veiled Christ

Raimondo di Sangro, Prince of San Severo, was a man of multifaceted and mysterious personality. He loved to spend his time on inventions and research.

At the same time he was an admirer of art and culture and it was he who commissioned the realization of the Veiled Christ.

Initially it had to be the artist Antonio Corradini to create this work, but unfortunately in 1752 he died and did only in time to make a small terracotta draft of what he had in mind (now kept in the National Museum of San Martino).

The task thus passes to the sculptor Giuseppe Sanmartino, who did not take much account of the suggestion of the Venetian colleague and freed his creativity to produce a sculpture that is still talked about centuries later.

The representation of Christ

The Veiled Christ was thus terminated in the 1753. Sanmartino imagined it in its natural size, lying on a mattress, with its head raised by two large cushions and covered with a sheet.

But not just a sheet.

A delicate veil, which let us see the features of the tortured body of Christ. The limbs of Our Lord thus remain visible, with all their small folds and facets.

The veil is so thin that it reveals the face and the signs of torture. The shroud was engraved with such perfection and such meticulous skill that it is possible to recognize a swollen vein in the middle of the head and the hollows of the face among the waves of the marble.

The creation is so suggestive that Christ appears to us almost dying.

At the foot of the body, the symbols of the torture: the crown of thorns, the nails and the pincer used to extract them from the wooden cross.

The legend of the Veil

The Veiled Christ has always seemed so powerful and wonderful, and at the same time realistic and delicate, that it has led visitors to think that it could not have been made solely with simple marble.

A legend has thus been created over time which stated that Raimondo di Sangro, who was also a very famous alchemist and scientist, had taught the sculptor Sanmartino a special technique for "marble" the veil.

Practically, after the conception of the figure of Christ carved in marble, the artist would have placed a real veil of fabric on it and - with a mystical chemical formula - would have obtained the calcification of the fabric in marble crystals.

The numerous studies and endless analyzes, on the other hand, leave no room for doubt.

Moreover, various historical documents, such as writings and letters of the time, testify that the material used was exclusively the cold and ethereal marble.

And for me the aforementioned fifty ducats will be paid to the Magnificent Giuseppe Sanmartino on behalf of the statue of Our dead Lord covered by a veil of marble ...

And again, in the letters that Raimondo di Sangro writes to the physicist Jean-Antoine Nollet and to the academic of the Crusca Giovanni Giraldi the veil is quoted as "made from the same block as the statue".

We are, therefore, in front of a work that is in some ways divine, which is as realistic as it is so intangible.

The only way to approach it a little more is to see it up close with one's own eyes, in front of the main altar, in the center of the Chapel of Sansevero.

Directions to get to the Sansevero Chapel

Video description of the Veiled Christ

The Space Cinema in Fuorigrotta (Naples)