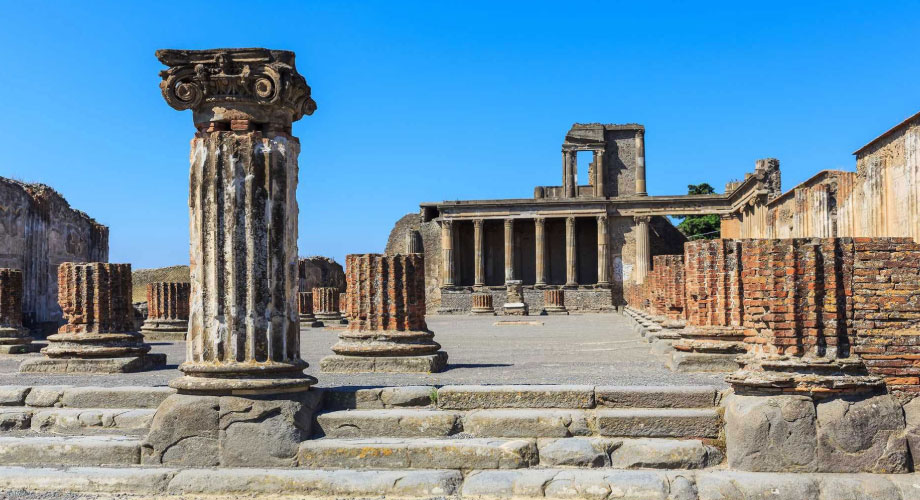 Buy only the audio guides at the checkout! They are more complete and cheaper.

The Archaeological Excavations of Pompeii, a fascinating journey into the past

The eruption of 79 AD

The famous eruption of the Vesuvius of the 24 August of the 79 AD caused the destruction of Pompeii and a vast area of ​​the current Vesuvian area, such as the cities of Ercolano, Stabia and Oplonti.

The city was buried by a thick layer of ashes and lapilli. We have heard about those terrible events through the writings of Pliny the Younger in the two letters to Tacitus in which he tells the dramatic death of his uncle, Pliny the Elder, author of the Historia Naturalis, who died in an attempt to bring relief to the population hit by the immense calamity.

Testimony even more stringent than that calamity is handed down through the Archaeological excavations of Pompeii whose remains, buried in the eruption, have been preserved almost intact to this day.

The excavations have brought to light a large quantity of finds of very valuable value. Already since the end of the sixteenth century were found archaeological finds of the ancient city of Pompeii. In the 1748 during the reign of Charles III of Spain the first ones began systematically excavation campaigns with a work that continues today.

To date the Excavations of Pompeii represent the third most visited state museum site in Italy, surpassed only by the Pantheon and the Colosseum with the Roman Forum. Moreover, the archaeological park of Pompeii has become part of the UNESCO heritage, together with the excavations of Herculaneum and Oplonti.

What to see in the Pompeii excavations

To visit the entire archaeological area of ​​Pompeii it would take more days, given the vastness of the place and the considerable number of places to admire and visit. That's why it's better to focus on some unmissable places to better learn the past of our territory, the habits, traditions and customs of the ancient inhabitants of Pompeii before the eruption of 79 AD

La Casa del Fauno is one of the main attractions of Pompeii. an ancient Roman villa of about 3000 square meters, among the most impressive and majestic in the city. The structure dates back to the second century BC and its name refers to the discovery of a bronze statue depicting a faun, at the center of the espluvium. The House of the Faun has two gardens with peristyle and two atriums, was decorated with frescoes and paved with mosaics, including that of the exedra, depicting the battle between Darius and Alexander, kept in the National Archaeological Museum of Naples.

The Amphitheater du built between the 80 and the 70 BC and is among the best preserved in the world and among the largest, so you can hold twenty thousand people. The cavea was divided into three sections, according to the social classes of the spectators and there was also a velarium that protected viewers from the sun or rain. The exterior is characterized by a lower order with Czech arches, and a higher order with round arches.

This theater, not far from the Casa del Fauno, could contain up to 5000 people. The orchestra area is shaped like a horseshoe, the cavea is divided into three orders and the whole structure could have been covered by a velarium; the scene was reconstructed after the earthquake of 62, decorated with marble and statues, while the background wanted to imitate a princely palace. This was where they were represented the famous works of Plautus and Terence, and it is always here that today, as millennia ago, ancient Greek dramas are staged on the occasion of special theatrical reviews such as Pompeii Theatrum Mundi.

Villa of the Mysteries

Located near Ercolano, more distant than Pompeii, this villa belonged to the Roman patricians, probably to the wife of Emperor Augustus, Livia. The villa owes its name to auna series of frescoes in the triclinium, with life-size figures that probably represent a show of mimes, or moments of a rite, or the preparation of a woman for marriage. Structured on two floors, the villa had rustic environments, such as an oven and kitchens, but also residential ones, such as the atrium, a veranda and the spa area.

The Forum of Pompeii

It was the heart of the daily activity of the ancient inhabitants of Pompeii. It was here that the most important buildings of the city appeared, such as those of the Public Administration, where political figures met, and here religious events and commercial activities took place. The Forum was set up in the second century BC, demolishing the many shops that surrounded it and embellishing the square with statues, never found, of gods or illustrious citizens.

It is one of the oldest in Pompeii, built between 575 and 550 BC. The temple of Apollo is surrounded by a tufa stone, with columns in Ionic style and Doric trabeation. The high podium of the temple, where the cell is located, which is accessed by a staircase, is paved with polychrome stones and in the courtyard were the statues of Apollo and Diana in the form of archers, an altar dating back to 80 BC a sundial.

These spas are the oldest in the city, dating back to the III-IV century BC. The rooms were divided for men and women and possessed the frigidarium, the calidarium and the tepidarium, changing rooms and the furnace room where heat was produced. The gym was reserved for men only. There was also a latrine and a swimming pool. The flooring of the baths was completely heated. The stucco depictions of mythological subjects and Pompeian characters drawn under the domed vault in imitation of the sky are still preserved.

Some advice on how to visit the Pompeii ruins

Is it worth taking the audio guides?

Buy an audio guide is fundamental to be able to fully appreciate the visit of the vast Pompeii, the signs are few and the textual information does not provide a complete visit experience.

To save a few euros you would lose basic knowledge to understand how Pompeii lived and the details of the various places that, to an inexperienced eye, may seem very similar and monotonous.

But beware: outside the Excavations you will find a horde of tourist guides and unofficial audio guides, authorized or not.

Keep it wideAt the ticket office you can buy an audio guide cheaper and enormously more complete!

How long is the visit to Pompeii?

The visit will be very long and will take you away for a whole day, Pompeii was a really vast city.
Bring some fresh water and do not forget to take a map of the city at the entrance, otherwise you will surely miss it and risk wandering for a long time.

Do not take "souvenirs" from the archaeological site

I know it seems trivial to say, but do not take "remember" along the way.
There are numerous checks and the fines are very high, in some cases it is even included in the penalty risking detention!

Information on the excavations of Pompeii

Address of the excavations of Pompeii:

The excavations of Pompeii are accessed through 3 entrances:

How to get to the Pompeii ruins:

Are you looking for more details to reach the Pompeii excavations? Click here!

Contacts of the excavations of Pompeii:

The cheapest hotels near the Pompeii excavations

Via San Gregorio Armeno in Naples