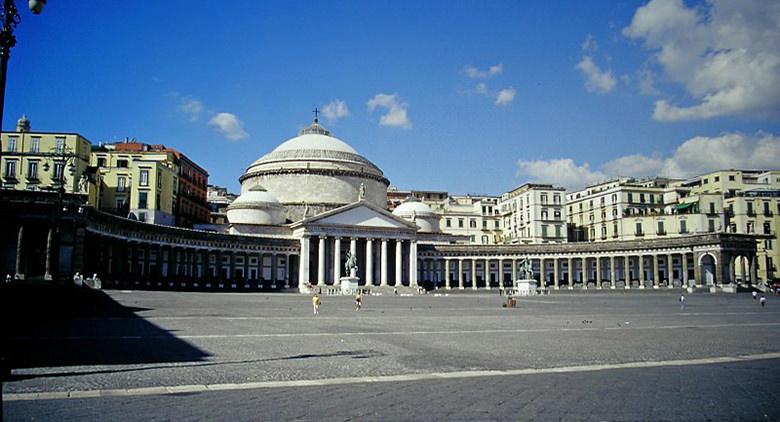 Piazza del Plebiscito, the symbol of the city of Naples

Piazza del Plebiscito (in the past Largo di Palazzo or Foro Regio) is one of the most beautiful and characteristic squares of Naples whose name is due to plebiscite which, in October of the 1860, had established the annexation of the Kingdom of the Two Sicilies to the Kingdom of Sardinia.

Although in the sixteenth century the square was already present as a widening of a Palazzo Vicereale, the true story of Piazza del Plebiscito begins only when the Palazzo Reale was completed, when Domenico Fontana, one of the famous architects of the palace, decided to design a "Largo di Palazzo" that it turned no more towards the "Toledana road", but towards the nascent open space, built as if it were a scenic architectural backdrop that made the city dialogue with the opening towards the sea.

Piazza del Plebiscito has one very particular shape. Its structure is half semicircular (the one that starts from the Basilica of San Francesco di Paola in the middle of the square surrounded by the colonnade) and half rectangular, from the closing of the hemicycle to the Royal Palace.

Located in the historic center of the city, between the Lungomare and Via Toledo, the square is about 25000 square meters wide. For this reason it is often used as a location for large events, such as concerts or fairs.

In Piazza del Plebiscito there are important statues and palaces, in addition to the famous and spectacular Royal Pontifical Basilica of San Francesco di Paola, characterized by its semicircular colonnade.

As tradition dictates, once you arrive in Piazza del Plebiscito, tourists but also the Neapolitans themselves try their hand at a particular game: cross the square blindfolded.

The challenge consists of let a person blindfolded by Palazzo Reale walk towards the two horse statues placed at the center of the square. A mission, apparently, impossible, given the natural slope of the square which will always tend to turn the blindfolded man into a rectilinear path towards the two statues. Inevitably the brave one will be on the other side of the square, to the right or left, without even realizing it.

According to legend it is one curse launched by Queen Margherita di Savoia that forced the prisoners to cross the square blindfolded to save their lives. But nobody, of course, could do it. The most logical explanation concerns, instead, the paving of sanpietrini that covers the square, arranged in a non-rectilinear way, so as to lead anyone (obviously blindfolded) from one side of the square to the other without ever going on straight.

Piazza del Plebiscito (formerly Largo di Palazzo or Foro Regio) is one of the most beautiful and characteristic squares in Naples whose name is due to the plebiscite which, in October 1860, had established the annexation of the Kingdom of the Two Sicilies to the Kingdom of Sardinia.
Address: Piazza del Plebiscito
City: Napoli
Region: Campania
Country: Italy
Coordinates: 40.8364721,14.2482359
Operating hours: open h24
Admission for visitors is free.
Tag:
Rate this post
[Total: 3 Media: 2.3]