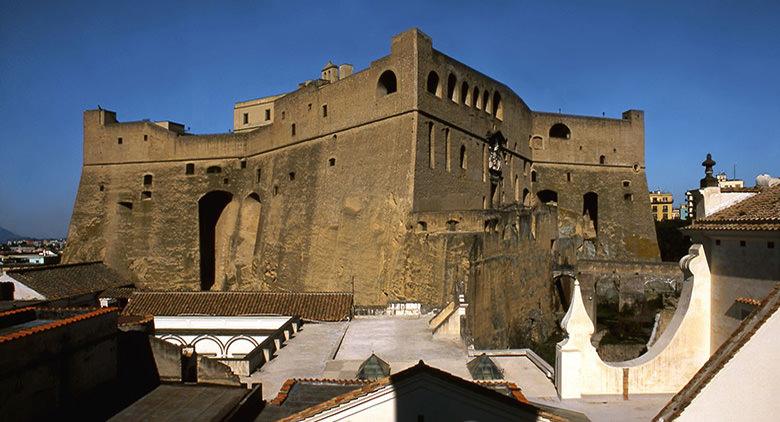 Castel Sant'Elmo dominates the city of Naples from the highest point of the Vomero hill, located in Largo San Martino, from which you can enjoy a splendid view of the historic center.

It is a medieval castle built around the 1300 in the same place where, in the tenth century, there was a chapel dedicated to Sant'Erasmo, from which Eramo, Ermo and then Elmo, which gave the present name of the fortress. Originally it was a Norman observation tower (called Belforte), and it was Roberto d'Angiò who commissioned the architect Tino da Camaino in 1325 to construct the Palatium castrum, whose works ended in 1343 under the reign of Giovanna I d 'Anjou.

Since then the Castle was besieged several times for its strategic position and control on the streets of Naples, and was a military target especially during the dispute between Spaniards and French for the conquest of the Kingdom of Naples. Between 1537 and 1547 Castel Sant'Ermo, later called Sant'Elmo, was rebuilt by commission of the Spanish Viceroy Don Pedro De Toledo and assumed the current six-pointed star plan.

In the 1587 a lightning struck the castle destroying the castles and military houses and the internal church. The building was then rebuilt between the 1599 and the 1610 by the architect Domenico Fontana.

Between the seventeenth and eighteenth centuries the castle became a prison, where the philosopher Tommaso Campanella was also a prisoner, and was the seat of revolutionary movements in the 1799, when it was taken by the people and besieged by the Republicans who proclaimed the Neapolitan Republic in the Piazza d'Armi. Castel Sant'Elmo, after the collapse of the republic, was still a prison, where Giustino Fortunato, Domenico Cirillo and Luisa Sanfelice were imprisoned, and remained a military prison until the 1952.

Only in the twentieth century 80 Castel Sant'Elmo became a structure of cultural and museum interest and from the 1982 the entire monumental complex was entrusted to the custody of the Superintendence for Artistic and Historical Heritage of Naples, open to the public in the 1988.

What to visit in Castel Sant'Elmo

Do not miss, during the visit to the castle, the evocative piazza d'Armi, from which you can enjoy an incredible view of the gulf of Naples, the historic center and the promenade, the Cave of the Hermit, the prisons of the common and illustrious prisoners, the Torre del Castellano and the baby church of Sant'Erasmo, built by the Spanish architect Pietro Prati in the 1547 and completely redone by the architect Domenico Fontana located at the top of the large square.

Currently Castel Sant'Elmo hosts temporary art exhibitions and exhibitions, but also festivals and theatrical and musical festivals. Moreover the castle is permanent seat of the Museum of the Twentieth Century 1910 / 1980, a museum in progress that collects works created by Neapolitan artists during the twentieth century, including sculptures, paintings and graphic experiments. Among the authors Enrico Baj and Mimmo Paladino.

By car
from the highway, ring road, exit Vomero

By plane
from Alibus airport to Piazza Municipio, funicular to Piazza Fuga (Vomero) or underground to Vanvitelli

By bus
from Piazza Vanvitelli V1 to Largo San Martino

Castel Sant'Elmo on the website of the Campania Museum Complex