The Catacombs of San Gennaro in Naples 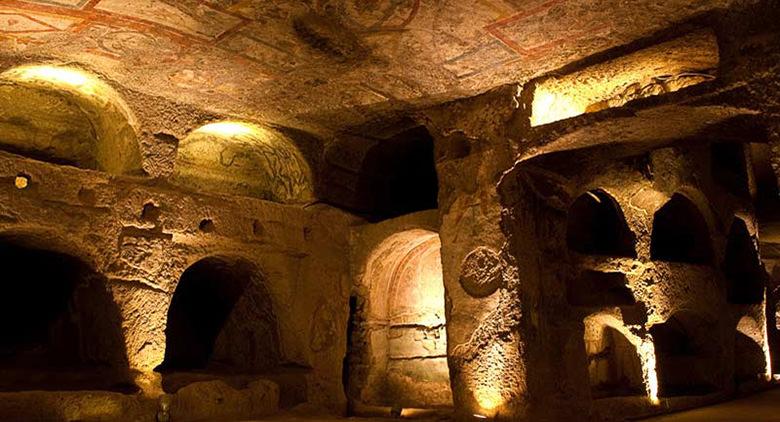 Le Catacombs of San Gennaro they are cemetery areas dating back to the 2nd century AD located in the subsoil of Naples, in correspondence with the Sanità district. It is a unique place to get to know the Christianity of the Neapolitan people through the ancient tombs of the first Neapolitan Christians and the bishops of the city.

The area of ​​the catacombs extends over 5600 square meters dug into the tuff of the Capodimonte hill and welcomes about 3000 burials.

The first nucleus of the Catacombs consists of the sepulcher of a noble family that later donated the spaces to the Christian community. From this first level a lower one was obtained but not superimposed where it was made the sepulcher of Sant'Agrippino, VI bishop of Naples and first patron of the city. In this vestibule dug into the tufa, in the Ipogea Basilica of Sant'Agrippino, mass is still celebrated.

In the upper catacomb it originated from an ancient sepulcher, dating back to the III century AD, which preserves some of the early Christian paintings of southern Italy. It began to expand when in the fifth century the translation of the San Gennaro's remains, patron of Naples. This catacomb, given the presence of the martyr, already became a place of pilgrimage and a cemetery for burial.

After the tomb of San Gennaro the Crypt of the Bishops, where the bishops of the city and the majestic were buried Basilica Adjecta, an underground basilica with three naves.

In addition to the burials of common bishops and deceased, the Catacombs of San Gennaro include a pictorial-mosaic heritage from the inestimable value as Byzantine paintings of the IX-X century AD and valuable mosaics of the V century.

The neighbors are also noteworthy Catacombs of San Gaudioso.

Information on the catacombs of San Gaudioso in Naples

The entrance is adjacent to the Basilica of the Good Council, Via Capodimonte 13 - 80136 Naples

By bus
From National Museum: 168, 178, C63, R4 lines. Get off at the Basilica Incoronata - Catacombe San Gennaro stop

By car
Exit of the Naples Capodimonte ring road.
Turn right into via Capodimonte. The Basilica is on the right after 200 meters.

There is free parking.

Catacombs of San Gennaro in Naples

The Catacombs of San Gennaro are cemetery areas dating back to the XNUMXnd century AD located in the subsoil of Naples, in correspondence with the Sanità district.
Address:Via Capodimonte, 13
City:Naples
Region:Campania
Country:Italy
Phone:0817443714
E-mail:[email protected]
Coordinates:40.865615,14.247644
Hours for visitors(updated to 2 August 2021):
Official Website:http://www.catacombedinapoli.it/it/luoghi/catacombe-di-san-gennaro-napoli
Ticket price for visitors(updated to 2 August 2021):
Types of payment accepted:cash,
Tag:

The Augusteo Theater in Naples

The Catacombs of San Gaudioso in Naples