Sant'Agata dei Goti: the history of the village and what to visit 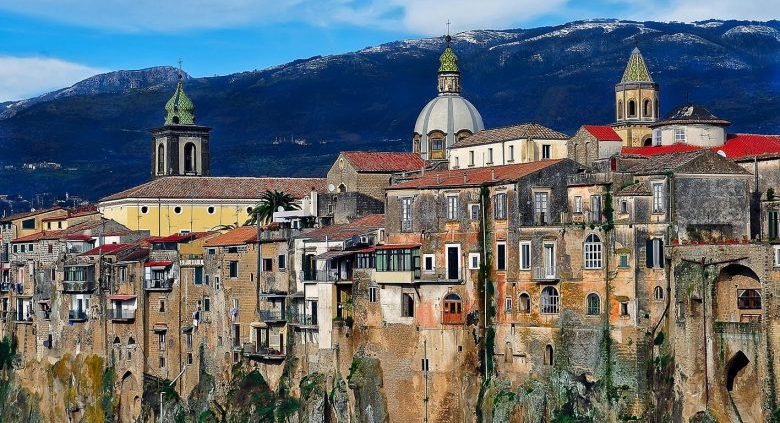 Characterized by its medieval and particularly suggestive appearance, Sant'Agata dei Goti is an important Campania village in the province of Benevento.

The history of Sant'Agata dei Goti

A village set on a tufa spur, with a history that has lasted several centuries and very interesting traditions.

The medieval village of Sant'Agata dei Goti is a tuff terrace suspended in time and surrounded by nature. Among destructions and occupations, over time the town of Sannio has been able to resist various vicissitudes. The old village of Saticula was first occupied by the Romans, after an exhausting battle with the Samnites, and later conquered by the Lombards.

It was therefore the Romans to camp first on the rock, initially only with some veteran soldiers, and then forming a colony of the Empire commissioned by Octavian Augustus.

In the Middle Ages Saticula then underwent a series of dominations: Lombards, Normans, Swabians and Angevins followed one another over time.

But it is in the sixth century that the ancient village changed its name in honor of Sant'Agata.

Subsequently, according to one of the theories related to the name of the village, it becomes Sant'Agata dei Goti because for a long time the place it was a fief of the French family De Goth.

Today the village of Sannio jealously guards the traces of its long past.

The narrow streets, the houses, the characteristic tuff, the monuments of the historic center and the churches fully express the identity of this village in the Benevento hills.

Church of the Annunciation

The tour can start with the sumptuous church of the Annunciation, restructured in the fifteenth century and characterized by the marble portal and the wooden door.

Inside you can see the fresco that tells the Last Judgment and the polychrome glass windows. The Church of the Annunciation is a collection of Baroque and sixteenth-century decorative elements.

A few steps away and here is the Romanesque church of San Menna. In this place of worship some important historical pieces have been brought to light by the restoration of the twentieth century.

Its realization is due to the count Roberto the Norman.

The Cathedral of the Assumption

But the building of worship and the most important of Sant'Agata dei Goti remains the Cathedral of the Assumption, in piazza Sant'Alfonso.

Founded on a Roman temple, the Cathedral has been restored several times. To welcome tourists a long arcade with twelve columns, the Latin cross plan, the eighteenth-century side chapels and the marble altars.

Of particular interest depictions of monstrous animals and human faces. Other interesting churches are those of Santa Maria di Costantinopoli, of Sant'Angelo in Munculanis and the church of San Francesco.

The historic center, the Ponte sul Martorano and the Palazzo Ducale

The historic center is a crossroads of alleys and alleys, little houses, old shops, ancient buildings and churches.

A great semicircle where time seems to stand still, often the seat of film sets.

The bridge over the Martorano

Once in Sant'Agata dei Goti you should not miss the walk along the Bridge over the Martorano, from here it is possible an enchanting view over the whole historical center.

In the evening, with the lights that illuminate the tuff spur and the houses of the village, the suggestion increases.

even the Ducal Palace, an ancient residence of several princes and many noble families, is worth a visit.

It is an imposing structure opposite the church of San Menna, built by the Lombards and then restored by the Normans.

Only one remains of the old four towers of the medieval palace, once used as a prison.

Over the centuries the building has been modified several times, according to the fashion of the time and the tastes of the owners.

The signs of the past and the long history of the Ducal Palace can still be seen today through the sixteenth-century pictorial decorations.

An old round arch allows entry into the building and to the first courtyard, while the upper floors retain the interesting traces of the medieval construction.

Where to sleep in Sant'Agata dei Goti: hotels and B&B at a good price

Vesuvius, the most famous volcano in the world