The Lungomare di Napoli, one of the most beautiful walks in the world 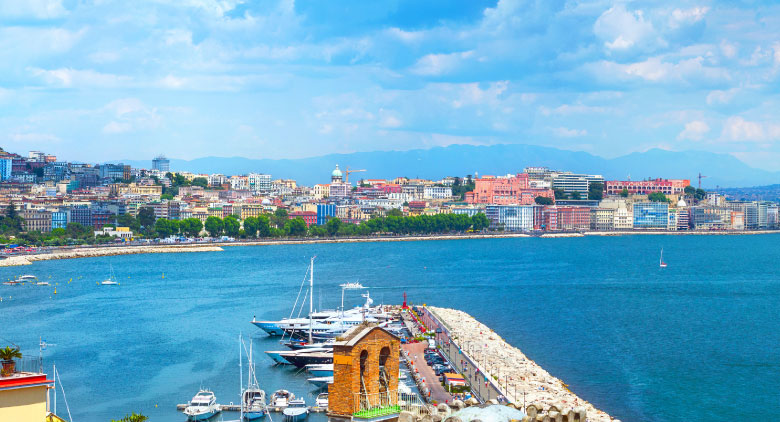 The Lungomare di Napoli, information on what to do and places of interest to see from via Nazario Sauro to Mergellina.

Among the most relaxing and suggestive activities to do in Naples can not miss a walk along the seafront of the city. One of the most loved and frequented places by citizens and tourists and constantly animated by events of all kinds but also by the numerous bars, restaurants and pizzerias that follow one another along the entire route.

The Lungomare di Napoli is a route of about 3 km that runs along the sea and that starts from Santa Lucia, from Via Nazario Sauro, and goes up to Mergellina, where it ends via Caracciolo, skirting one of the most beautiful "views" in the world, able to fascinate tourists but also the inhabitants themselves who crowd the splendid promenade during the whole year.

The wonders of the waterfront of Naples

Stroll along the waterfront of Naples means to admire at a glance most of the beauties that characterize the city: the VESUVIO, the island of Capri, Castel dell'Ovo and the promontory of Posillipo, while on the other side of the street you can attend, at any time of the day, the lively life of the city, made up of bars, restaurants of various kinds and pizzerias.

To skirt the walk on the side opposite the sea, the green of the park of the Villa Comunale and, as a background along the way, the hill of Vomero with Castel Sant'Elmo.

From the beach of the Chiaia Riviera to the Lungomare Liberato

Until the end of the 800 the Lungomare did not exist, and the sea bathed the city up to the Riviera of Chiaia (on the other side of the Villa Comunale). In place of the cliff and the road there was a beach very popular with the Neapolitans. That's why, when the sand was replaced by asphalt and rocks, the inhabitants of the city continued to look for a link with the sea, spending their weekend days walking on via Caracciolo e via Partenope.

Recently made pedestrian and closed to the traffic of cars in the points of greatest pedestrian flow, and renamed for this reason "Freed seafront", is today one of the most fascinating and romantic locations in the city, considered by many "The most beautiful walk in the world", which has nothing to envy to the promenades of other international cities.

The events on the Lungomare di Napoli

The most important events organized in the city, starting fromAmerica’s Cup of the 2012 and the 2013, passing through the Davis Cup, sailing championships and other water sports, until the traditional appointment with the Pizza Village, but also the events organized for the New Year, are set up right on the waterfront, which makes them even more impressive and exciting.

The Borgo Marinaro and the Castel dell'Ovo: from here you can admire the Lungomare

A must for a walk on the promenade is at Borgo Marinari, a picturesque little port with bars and restaurants specialized in fresh fish, where it seems that time has stopped. The village was born on the Isolotto di Megaride where, according to the Greek myth, the body of the mermaid Partenope was buried, who allowed himself to die in these waters after the refusal of Ulysses to his love. And it was the islet of Megaride to give rise to the city that was born then, in all respects, starting from the sea.

Here is also the famous Castel dell'Ovo, the oldest castle in Naples and true symbol of the city. The castle can be visited both inside, where in its rooms exhibitions and photographic exhibitions are set up, both outside, from where you can admire, from any height, the Lungomare from an unprecedented point of view: from the sea.