The underground paths of Naples between galleries, catacombs and hypogea 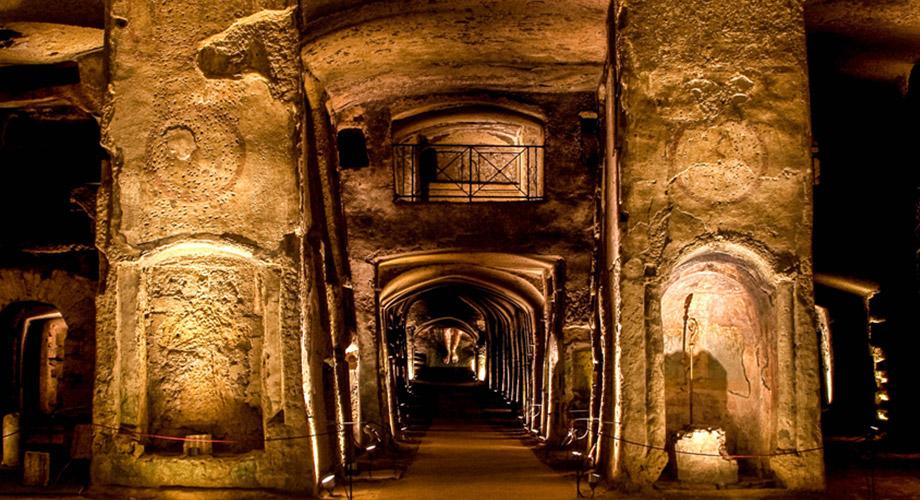 For a real journey through the various historical periods of Naples, the underground paths between tunnels, tunnels, catacombs and hypogea.

Under the churches, palaces, monuments, castles, under the daily life that animates the city, another Naples is hiding, made of tunnels, tunnels and paths, dug into the tuff thousands of years ago.

And the Naples of the subsoil which, through its cavities, emulates the Naples of the surface preserving the memory of an ancient past, that of the Greek and Roman, but also more recent. The galleries and cavities were initially built by the Greeks to extract the tuff to strengthen the city walls, while Romans they used it to collect rainwater, forming a complex network of aqueducts that brought water into homes up to 1885. During the Second World War, the tunnels were used by citizens to protect themselves from bombing.

The true belly of the city lies in the subsoil and, thanks to archaeologists and speleologists who have made its foundations accessible, there are today exclusive tour routes between ancient and recent paste.

One of the first underground routes open to the public is that of Napoli Sotterranea. From 30 years it is possible to visit this fascinating place located at 40 meters of depth, with entrance from Piazza San Gaetano in via Tribunali. Walking through tunnels and cisterns you can admire the remains of theancient Greco-Roman aqueduct, the anti-aircraft shelters of the Second World War and the remains of an ancient one Greek-Roman theater where the emperor Nero performed.

The itinerary also includes visits to the War Museum, the "Arianna" Seismic Station and the Hypogeal gardens, a kind of greenhouses in the subsoil in which various species of plants are grown, exploiting the humid climate.

Another fascinating underground itinerary is the Galleria Borbonica (or Bourbon Tunnel), found in the 2005, which connects Palazzo Reale and Piazza del Plebiscito to Piazza Vittoria, crossing the hill of Pizzofalcone. A hidden path wanted by King Ferdinand IV of Bourbon to create one quick escape route for the army. The Tunnel, formed by ancient tanks and aqueducts built in the 600, was inaugurated in the 1855, but remained open only three days. His underground cavities served as anti-aircraft shelters under the bombardments of the Second World War and the population was hiding there for many days when the alarm sounded.

In the visit path you can see vintage cars and motorcycles, ancient statues, but also small beds, kitchen utensils and remains of electrical systems.

To immerse yourself in the Greco-Roman Neapolis, the so-called Naples Sotterratta, you must visit the excavations of San Lorenzo Maggiore located in the basement of the basilica of the same name in Piazza San Gaetano, Via dei Tribunali. TO 10 meters of depth it is possible to admire the remains of the macellum, the ancient Roman market, with nine shops (tabernae) that gave onto the street and where they sold artisanal food and artifacts.

The ancient was found here in the Decumano Maggiore Roman forum, corresponding to the Greek Agora, where the civil and religious center of the ancient city was located and where commercial, craft and political activities took place.

Cemetery of the Fontanelle

Visiting the Fontanelle Cemetery you can fully understand the deep bond between the Neapolitans and the world of the dead because they practiced the rite of pezzentelle souls.
Located in the Health District, it consists of large tufa cavities used by the 1656 to bury the thousands of deaths caused by the plague and cholera. It was at that time that the Neapolitans developed an intense veneration towards the dead and the rite foresaw theadoption of a capuzzella (skull) in exchange for intercession and benevolence.
Inside, in addition to about 40000 human remains, one can admire one reproduction of the Grotto of Lourdes, a nativity scene with life-size figures and some famous capuzzelle such as Il Capitano and Donna Concetta.

A very suggestive route is in the Catacombs of San Gennaro and San Gaudioso, both in the Health District.
The first date back to the 2nd century AD, but were enlarged in the fourth century with the burial of the first patron of Naples, Sant'Agrippino. There are two levels: the lower one with tuff cavities created around the Basilica of the saint and the superior that was extended with the arrival of the remains of San Gennaro (today in the Duomo). There is also a crypt and some of the early Christian paintings of the South.

The Catacombs of San Gaudioso are the burial place of this saint who arrived in Naples after his escape from the Vandals. Many Christian symbols are still preserved mosaics and frescoes including the one that portrays the Death that wins over everything, which is said to inspired the Level of Totò. There are still the drains, niches where the schiattmuorti they made the bodies lose their bodies before they were buried.

Museum of the Underworld

The Museo del Sottosuolo is located under Piazza Cavour, in the historic center, and is another of the gods anti-aircraft shelters that the population used to shelter from the bombardments of the Second World War. During the excavations and the cleaning operations many were found objects of daily life, but also tools from excavator work and some ampoules used by pharmacies at the time.

The visit is divided into an itinerary between the internal tunnels, but there is also the route "Time Machine"In more intricate passages and in the three underground supply systems: Bolla, Augusteo and Carmignano". It happens that the Museum is also venue of events made suggestive by the underground location.

Greek hypogens to the Virgins

In the Borgo dei Vergini, in the Rione Sanità, interesting sites have been found both for the incredible state of conservation and for what they represent. It is about the hypogea of ​​the ancient Hellenistic necropolis, or Greek tombs that represent a rare testimony in Europe. The most famous are theHypogeum of the Cristallini andHypogeum of the Togati.

The first contains some carved tombs representing theonly similar example in Southern Italy, while the second is a sepulcher discovered in the 1980 dated between the end of the IV and the beginning of the III century. BC and its name derives from a high relief that portrays one aristocratic couple wearing typical Greek togas.
These sites are not always open and are accessible during guided tours organized by local associations, increasingly active in this regard.

Starred restaurants in Naples and its surroundings: the premises with ...

The 10 things to see in Naples