Spanish
HomeWhat to seeStreet art in Naples
What to see 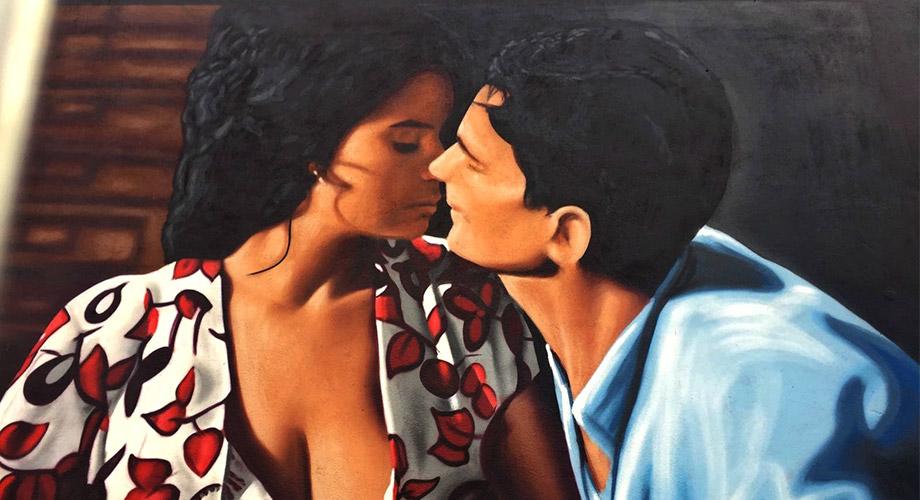 Street art not to be missed in Naples with murals, graffiti and drawings by innovative and current international artists.

Naples is dotted with interesting and original works of street art, between graffiti, murals, stencils and posters made by some of the most important street artists in the world.
From the historical center to the suburbs, their works not only color the neighborhoods of the city, but they are also a great tourist attraction and are often full of meaning and symbolism. In fact, urban art in the city melts ancient and modern, sacred and profane and addresses those who are the points of reference for a people with a thousand traditions, such as religion and sport, without drawing political and social commitment.
Here is a selection of the most important street art works in Naples.

Park of the Murals

Il Merola Park of Ponticelli its called Park of the Murals for the presence of four great works of street art.
The first portrays Ael's smiling face, one little girl Rom, realized by Jorit, among the most famous street artists in Italy, and is titled All 'song' and criature.
The second work is of Zed1 which reproduced, in surrealist style, gods toys with a joypad, and is titled A 'pazziella n'man is criature.
The third, The retention of sinners, and of CDO and reproduces gods faces inspired by the inhabitants of the neighborhood.
The last work is Those who loved it did not forget, of Rosk & Loste, and depicts two children playing soccer. They are a clear reference to Maradona because one of the two wears the shirt of Naples and the other of Argentina.

The Italian-Dutch artist Jorit has also made another important work of street art in another suburb of Naples. It is abouthuge mural dedicated to Maradona on a facade of a building of San Giovanni a Teduccio and wants to be, at the same time, a tribute to the Pibe de Oro and an initiative aimed at the rebirth of the neighborhood.
È the largest mural in the world that portrays Maradona and the same Argentine champion personally thanked Jorit for the beautiful work.

A very curious detail concerns the "signature" of the artist, two words hidden in one of the eyes of the football player visible only when the light of sunrise or sunset is reflected on the mural. The first word is not very understandable, while the second is definitely "Siempre".

Cyop & Kaf are two street artists whose works are often anomalous and restless and who have worked a lot in the streets of Spanish Neighborhoods. Are 223 the graffiti that can be found in the intricate alleys of the area, on walls, buildings, balconies, shutters, tuffs and that represent surreal characters, dream, sometimes disturbing, but always colorful and dynamic. Their purpose is to redevelop the districts, enhancing their beauty and telling, in a completely personal way, the stories of the places and inhabitants of Naples. It took Cyop & Kaf three years to paint all their graffiti and they did it as part of a project called Quore Spinato.

The San Gennaro which stands out on the facade of a large Forcella palace is another work of Jorit and has a very special characteristic: his face is that of a worker friend of the artist. The mural is more than 15 meters tall and has an absorbed look upwards. More than between graffiti, it can almost be included in the category of paintings, even if made with the spray, thanks to the naturalness and depth of its expression. For Jorit, drawing inspiration from the inhabitants of the neighborhoods in which he works is a way to give more humanity to his works.

On one of the facades offormer Occupied OPG (former Judicial Psychiatric Hospital) at Materdei it is possible to admire the enormous mural made byBLUE artist. The figure shows an ambiguous and enigmatic green character with an open mouth, a dramatic and disquieting figure that manages to relate to its context, like all the artist's works. In fact, the wide open mouth is right in correspondence of a window, giving a greater sense of disquiet. Blu is among the most important street artists in the world and his works are found in dozens of countries.

Always the work of the street artist Jorit, murals dedicated to Massimo Troisi was built on a façade of the sports hall of San Giorgio a Cremano. It was finished on the occasion of what would have been the sixty-fourth birthday of the actor and is a mural composed of three of the most famous scenes of some of his films.

The first is that of the miracle taken from the film I start again from three, the second image pays homage to the scene of Che non ci remained piangere who sees Troisi and Benigni write a letter to Savonarola and the last portrays the kiss between Troisi and la Cucinotta in Postman.

Madonna with the gun

It is of 'only documented work by Banksy in Italy and is located precisely in Piazza dei Girolamini. It is one of the most significant graffiti of the English artist in which the Madonna is painted with a gun in place of the halo, as a sign of the deep link between crime and religion in Naples. The mural is protected by a glass plate and, a few meters away, you can find a votive shrine with the Virgin Mary, in a combination of great impact. The work has a high value because Banksy is currently the most famous street artist in the world.

Zilda is a French artist very active in Naples and its graffiti can be found in various parts of the city. His works are inspired by Renaissance art and his technique is very particular: he first draws on paper, paints and then paste the posters on the selected places for the representation. One of his most famous works is an angel in Vico San Giovanni in Porta, but there are also significant drawings of a woman with a child in Vico Santa Maria dell'Aiuto, another angel and a woman in the former Filangieri Prison. His works can still be found in the districts of Poggioreale and Portici.

Made on the occasion of the second Scudetto of Napoli, in the 1990, the mural of Maradona is located in the Quartieri Spagnoli and has been restored in the 2016 thanks to the contributions of the citizens of the area. During the restoration work, the brilliant of Swarovski which at one time had been used as a Pibe de Oro earring and which has been relocated to the mural. Maradona wears the team shirt with the sponsor of the time and, of course, her indispensable 10 number.

It is the work of the Neapolitan street artist known with the name of Roxy in the Box and is titled Mission Possible. It is a very original mural that sees alongside the Patron of Naples, San Gennaro, and the painter Caravaggio, who spent the last years of his life in Naples. The Santo has a newspaper in his hands, The Sun 24 Hours, while Caravaggio reads the New York Times with a Supersantos under the right foot. An element, the ball, which is a strong reference to the streets of Naples, where there are often kids playing football.

The mural dedicated to the journalist killed by the Camorra, Giancarlo Siani, was made on a wall in front of the old house in which he lived. The authors are the Orticanoodles, pseudonym of the artists Wally and Alitaa, who wanted to remember and pay homage to the journalist just a few meters from the place where the tragic ambush took place. The work is long 38 meters and includes dozens of quotes from great artists such as Alda Merini and Vasco Rossi. The colors green, white and black are a reference to those of Mehari, the historical car of Siani, and those of printing and writing.

The mural of Fidel Castro was painted in the historic center of Naples, as a tribute to the value of the Resistance. Made by Mono Gonzales and Tono Cruz, two internationally renowned street artists, it is on the facade of the Mezzocannone Occupied social center, home to various collectives. The two authors concluded it on the day of the funeral of Lider Maximo and wanted to portray Castro reproducing his face twice, while looking in two different directions. A work with a deep political and social meaning, in perfect line with the type of art of Gonzales, an artist committed to representing social injustices and always on the side of the weakest.

Always made by Jorit, the mural Human beings it is located in San Giovanni a Teduccio, on the façade immediately next to the one in which the Maradona one was designed. With the chiaroscuro technique, a play was represented human being, the face of a common kid, of how there are so many, called Niccolò. It is a young scugnizzo that Jorit has realized both in first floor be with one zoom on the look.

The purpose of the artist is to want to do a tribute to all the Neapolitan people through the murals of a young boy who can very well represent the totality of our population.

The best works to see in Naples

The best trattorias in Naples